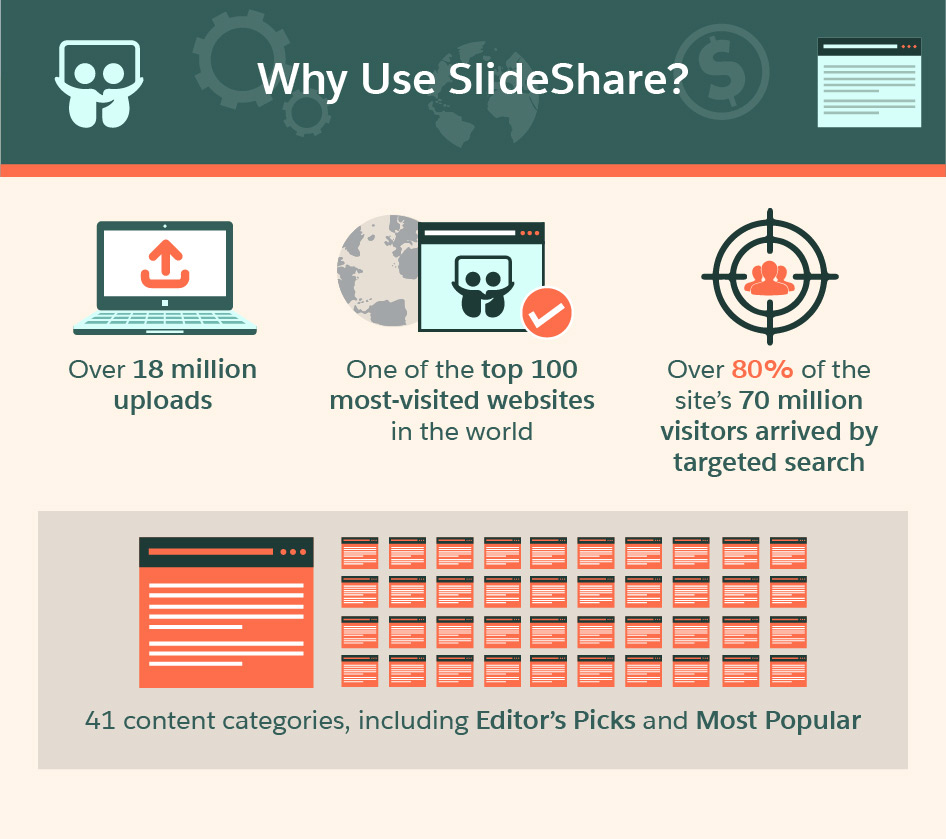 On SlideShare, millions of people upload professional presentations aimed at engaging more visually-minded thinkers. Sales teams can use SlideShare to drum up interest from their pitch decks. Best of all, SlideShare can be used for free and allows users to easily link to and share live presentations.

Furthermore, instead of sending large PowerPoint files over email, salespeople can link to a SlideShare presentation. This method makes it easier for prospects to circulate the presentation within their team and with other decision makers at their firm. Presentations with high view counts offer an added bonus of social authority, which readers may see as a positive signal about your brand.

Market Your Brand on SlideShare

In the business world, of course, we don’t have the luxury of building a deck that is completely graphic. Our presentations have to deliver everything from our business vision to product pricing without the benefit of a designer to build our decks.

Not having a designer is no excuse for a terrible presentation

Your presentations are a reflection of you and your company. Want to instantly lose credibility? Share a presentation that is dense with words, in different fonts and full of misspellings. No matter how good you are on your feet, you’ll leave your audience with a poor impression.

A lot of people tell me tell me that PowerPoint sucks. I think they are shooting the messenger but maybe they are right because – unfortunately – PowerPoint doesn’t write the presentation for us.

One sales vp told me that that she’d rather have her buyer looking at her products instead of a slide. Her point is well taken but a well-crafted PowerPoint presentation can frame the conversation, document the meeting and set-up key questions. Not surprisingly, the more presentations we built together, the more she wanted to use PowerPoint because of how the buyers were responding.

What makes a GREAT PowerPoint presentation?

A word of advice: practice with your presentation beforehand. You’ll feel more confident, know when and how to address each slide and it will help you consider the order of your slides more carefully. No one can follow a presenter who’s flipping slides forward and backwards to try and show something addressed later in the presentation.

It’s going too far to say a great presentation makes the sale but it uses the same components – a compelling story backed with strong proof points and powerful visuals – that you and the sales team use to build your business.

As Mark Twain so famously said, “There are lies, damned lies and statistics.”

Sometimes you know you have the right answer, so you work the research results to tell the story you know will sell the company on your program.

You risk being wrong, big time

The new product line was failing. The POS wasn’t meeting anyone’s expectations yet the consumer research not only validated the product concept but the follow-up research supported the marketing strategies implemented. What the heck was going on?

“We want it out or fixed”

The customer bought into the product concept. In fact, we brought the research to life in the presentations we were making. We had pictures of focus groups and shop-alongs. We put quotes into the slides that consumers had about our new product and marketing plans.

But once the product was launched, shoppers weren’t buying. And our retail partner was blunt and to the point.  The product needed to be fixed or we were going to be off the shelf.

Back to the drawing board

Truth was we inherited this new product from another team, so we weren’t steeped in the decisions that led to the ultimate marketing strategies.  That meant we were digging in with fresh eyes. This was the first of our insights: fresh eyes mean you see things differently.

The product concept was developed carefully and methodically. It was a home run in research from concept through production prototypes.  So we knew that the actual product wasn’t the issue. That quickly suggested the marketing was off base.

We pulled up the product presentations and reviewed what we had promised and the support we offered as a reason to believe. The case looked air-tight.  Then we decided to actually look at the original research. This was our second significant insight: go back to the data and make sure you aren’t drinking your own marketing Kool-Aid.

The PowerPoint slide had become the research

What we found was both shocking and perhaps expected since you know how poorly the product line was doing. The research done was qualitative and obviously subject to interpretation. And it was done with only 20 people. You read that right…the marketing for a nationwide product roll-out to a big box retailer was built on the input of 20 shoppers from that chain.

But that wasn’t our biggest gripe. Rather, three distinct themes in the research emerged. Two of them contradicted the product manager’s view of how to go to market. One aligned beautifully. The PowerPoint obviously played to that theme and no other point of view was introduced. The PowerPoint slide “became” the research and that was fatal flaw.

While there should have been some checks and balances on this project, we were able to see that the contrary positions held the right answer (after all, we knew what didn’t work).

Predictably, the end of the story is we fixed the marketing and the product line became success. And burned into our marketing philosophy is that we repeatedly return to the original research and never, ever, let the PowerPoint slide become the research.

Let us know if this has ever happened to you!